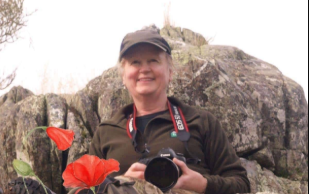 The tragic final photo that a keen photographer took just hours before her death when a whale capsized on the ship she was on board has been published by her family. On a boat tour organized by the Nature Photographic Society on Saturday morning in Goose Bay, near Kaikoura, on the east coast of New Zealand’s South Island, Diana Stewart, 68, was one of five passengers who they passed away

Around 10 a.m. local time, a whale capsized an 8.5-meter boat carrying 11 people over the age of 50 while they were photographing albatrosses. The skipper and six other passengers on board were saved and released from the hospital after being evaluated. Before boarding the tragic ship, Stewart captured a stunning photo of the pink and purple sunrise over the water near Kaikoura and emailed it to her family.

The Christchurch photographer frequently traveled to New Zealand’s scenic areas with the Nature Photographic Society. His son Fletcher Stewart said the boat trip to Kaikoura was one his mother had “wanted to do for years.” “Diana was a very talented photographer and she enjoyed traveling to remote parts of New Zealand to shoot what would always turn out to be unique landscape and wildlife images,” she told Stuff.

“Mom made many close friends through her shared passion; they remember her kindness and generosity. She was always helping new photographers just starting out, and she was always there with guidance and advice.” Fletcher said his mother’s talents also extended to fashion, painting and crafts. He added that the family would remember her ‘wonderful’ mother ‘of her more for her kindness, her care and her generosity’. “Her number one priority of hers was her family and she was always there when we needed her.”

Stewart was killed along with Christchurch man Peter Charles Hockley, Lower Hutt woman Cathye Haddock and her lifelong friend Susan Cade when the fishing boat they were on capsized. The identity of the fifth victim of the tragedy is still unknown. Police have not yet determined what caused the boat to capsize, but they believe a leaping whale was to blame. About two hours after the wreckage was pulled from the 10C water and brought ashore on Saturday, a New Zealand Police dive team arrived at the site. Around 4 o’clock, the yacht was brought to port after five dead were found inside the cabin. A passenger was seen sitting on top of the capsized boat as he waited to be rescued in harrowing photos.

Given recent reports of mass whale sightings in the vicinity, Kaikoura Mayor Craig Mackle claimed that a whale had surfaced from under the boat. He claimed that several sperm whales and humpback whales passed through the region, but he wasn’t sure what type of whale might have hit the ship.

We have an overturned boat capsized by a whale, from what we can understand, it came out from under it,” Mackle said. The mayor added that he had thought in the past about the possibility of a boat and a whale colliding, given the number of whales that frequent the area. He added that the water was “very cold” and that the outcome for anyone who fell overboard would probably not be good. “This is a tragic event that affects many lives, especially all families and loved ones. Our deepest sympathy and condolences go out to all of you. I would like to thank everyone involved in the rescue and recovery. Being able to bring everyone going home is the best outcome in such a terrible circumstance.

Although whale activity is expected in the waters around Kaikoura, no one has heard of a ship strike. There were reportedly few dangers at sea other than the prominent presence of humpback and sperm whales on the shoreline and small waves. The New Zealand Transport Accident Investigation Commission is searching for witnesses in Goose Bay when the tragedy occurred. The panel urges anyone who witnessed or captured what happened before, during or after the disaster to come forward.