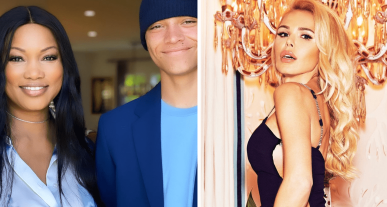 Diana Jenkins, star of ‘The Real Housewives of Beverly Hills,’ is seeking to clear her reputation in connection with “racist and threatening” comments online directed at co-star Garcelle Beauvais’ 14-year-old son, Jax. In a new complaint filed on Thursday, September 8, Diana accuses an anonymous troll of orchestrating a “hate campaign” and “morally bankrupt” in which internet bots were deployed to attack one of the twins Garcella shares with her ex Michael Nilson.

Diana filed a lawsuit in Los Angeles Superior Court, claiming that despite her on-screen conflict with Garcelle, she would never send Jax mean text messages. She, on the other hand, alleges that she is the victim of a malicious operation to blame her for messages that she claims were delivered by internet bots. She filed the complaint against unnamed defendants, identified in the petition as “John Roes” and “John Does,” as she does not know who was behind the campaign against Garcelle and her son. To avoid losing your rights under the statute of limitations, civil attorneys advise suing in Internet defamation cases even before the defendant is recognized.

“Dozens, if not hundreds, of people have posted messages attacking Ms. Jenkins for an act she never performed,” said Diana’s lawyers in the case, which Page Six acquired. “This action is the only way for Ms. Jenkins to fight back against the anonymous coward who decided to endanger her reputation, her livelihood and her life.” It was previously reported that Diana had to employ “24/7” security due to alleged death threats from ‘Real Housewives of Beverly Hills’ fans.

“Someone who posts racist and threatening messages to a fourteen-year-old is morally bankrupt. But the defendant was not content with attacking an innocent child. The defendant asserted that the profile and content of the posts would lead people to conclude that Ms. Jenkins was the one who purchased the bots used in the attack,” according to the lawsuit. “That behavior is also in the realm of the morally bankrupt,” she continues.

Diana argues that her confrontations with Garcella, a black woman, on season 12 of the hit show Bravo were polite and that she would never cross the line into bigotry. However, Diana maintains that racist tweets sent to Garcella’s son constantly told her to “leave Diana alone,” leading amateur Internet sleuths to suspect that she was responsible for the teen’s attack.

“The defendant intentionally created the content of the messages to reference Ms. Jenkins, appearing to support Ms. Jenkins and claim that Ms. Jenkins should be left alone. Framing the content of the bots’ messages in this way predictably led people to believe that Ms. Jenkins was using the bots to send Ms. Beauvais a warning,” the lawsuit states. The complaint contains links to tweets indicating the notion that she was at fault. It also cites an article written by Jeroslyn Johnson for ScreenRant in which the author summarizes various fans’ arguments that Diana was the perpetrator of the attacks, as well as a post by Avigail Landreneau on ‘All About the Tea’ listing the allegations. made. against Diana on Twitter.

According to a press release received by Page Six, Diana’s attorneys want to issue subpoenas to Meta, Instagram’s parent company, to “obtain information that could be used to identify the people who orchestrated the act.”

Erika Jayne Girardi yelled at Jax during her mother’s birthday celebration in episode 8 of the current season. As the festivities were drawing to a close, viewers saw Jax attempt to retrieve a flower arrangement, prompting Erika to exclaim “get the fuck out of here”, prompting Garcella to ask Erika if she had a problem with the flower arrangement. beverage. Erika revealed that she had been combining her prescription medication with alcohol and had not figured out how to reconcile her therapy with her alcohol use. In episode 9, she apologized to Garcella for her behavior.

Erika then accused Garcella of being worried to appear more worried on TV. Diana and Garcella got into an argument at the party, where the incident occurred because Diana made comments about Garcella’s close friend and co-star, Sutton Stracke. Some speculated that Diana was the source of Jax’s bot attacks. On August 26, she denied the allegations in an Instagram post. In August, Jax said on Instagram that she received hostile messages from viewers who were furious at Garcella for her fights on ‘RHOBH’ with Diana, Erika Jayne and Lisa Rinna, as well as confusion off the show over an “uneducated” statement from Diana. made about a black content creator.

“I’m a f*cking 14 year old leave me alone please,” the teen captioned a video showing a torrent of racist comments from fans, including one that read, “They’d kneel your neck if that wasn’t for your daddy.” white man, [Michael Nilon]. Tell your mom to leave Diana alone or you’ll take care of us.”

Diana, along with Erika, Lisa and other ‘RHOBH’ cast members, shared a statement from Bravo condemning the social media comments directed at Jax. Bravo released a statement condemning the bots’ abusive comments, and housewives from other franchises expressed their support for Garcelle and her family.

For her part, the Bosnian-born businesswoman released a further statement expressing her “shocked” reaction to the comments, adding: “No one should be treated this way, especially children. Unfortunately, this was not the first time that RHOBH children have been attacked. This has to stop. Let’s leave our children alone.”