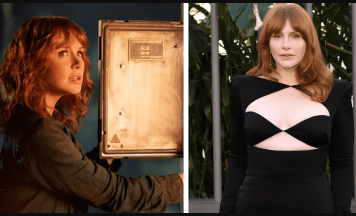 Bryce Dallas Howard spoke about the conversations centered around her body, which took place before the filming of ‘Jurassic World Dominion’. The actress is the latest in a long line of celebrities who have criticized Hollywood’s obsession with making its female leads lose weight. The 41-year-old actress Bryce played Claire Dearing opposite Chris Pratt’s Owen Grady in Universal Pictures’ Jurassic World Dominion. Metro asked her in an interview published on September 22 what her upcoming role in the latest film meant for female representation in Hollywood action movies. Howard responded by saying that she was “asked that she not use my natural body in the movies”, but that director Colin Trevorrow had supported her.

Howard revealed that his weight had been a topic of discussion in the first two Jurassic films he starred in and that he had to go on a diet after “notes” from unknown film executives told him to lose weight. But while he was shooting the third movie, when the subject came up again, director Colin Trevorrow drew a line.

“So I’m really excited [at] all the action that I got to do, and I was able to do it with my body, she was at the top of her strength, and I hope it’s just another indication of what’s possible.” she concluded. DeWanda Wise, who plays the character of Kayla Watts, also shared her take on body image: “It’s always something. There was a lot of resistance to Kayla having muscles, to what it means to be a woman, to look like a woman. It’s all over the place.” It’s relentless and impossible.”

“They introduce these heroines who aren’t perfect. There’s a story there, a sense that you can be heroic even if you don’t feel heroic. I’m interested in the future of action and blockbusters that really allow women to be completely human”. beings that we are.” Wise concluded.