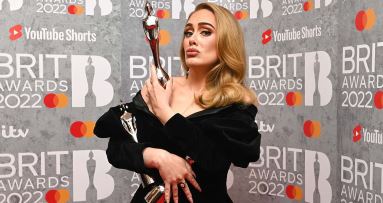 Adele, who has been vocal about her back issue since her teenage years, has now revealed that she also suffered a slipped disc, namely L6, after her son Angelo, 9, pulled a jump scare prank on her. The accident happened in 2021 when she was at home and was startled by the jump scare her son pulled off while coming out of the bathroom.

In an interview with Elle USA, the highly decorated singer spoke about her relationship with Angelo, mentioning the recorded conversations between the mother and son duo in her track ‘My Little Love’. Adele stressed that the conversation she shared with her son during the time was quite intense for a then-six-year-old, explaining to him the details of her split with his dad, Simon Konecki. Explaining that she wanted “to be clear with him and just be honest with him,” she said in the interview, “He’ll probably go through stages of hating it when he’s a teenager. But it was an important part of the puzzle I was trying to figure out of my life — not the album — so I had to include it.” Adele married Konecki in 2016 without getting a prenup, putting her vast fortune at risk.

Adele also spoke about the influence that Billie Eilish has on Angelo, stating that her son is a huge fan and totally obsessed with the star. “He’s going to go to [her room] after school and he’s going to read all the lyrics and then he’s going to want to discuss them,” Adele said. While Adele is dating billionaire sports agent Rich Paul, the 15-time Grammy winner has been raising Angelo with her father Konecki and maintaining a close relationship with him after her divorce in 2020.

Looking ahead, the ‘Set Fire to the Rain’ singer revealed that she is open to remarrying and having children. Adele seems to be obsessed with her boyfriend Rich Paul as she tackles her dream of being a stay-at-home mom and inspires people around the world like she has by breaking stereotypes and making a positive mark. “I’m a housewife and I’m a matriarch, and a stable life helps me with my music,” Adele said. When asked about the huge ring on her finger, Adele confessed that although she is in love with her boyfriend, she is not yet married or engaged and that she loves wearing high-end jewelry.